TEHRAN (defapress) – The Secretary-General of the Lebanese Hezbollah Resistance Movement Hassan Nasrallah reacted to the US assassination of General Soleimani in Iraq.
News ID: 79776 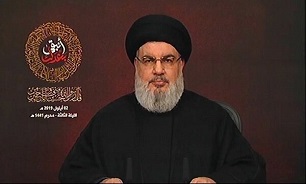 He said that those in the Resistance Front will continue on General Suleimani’s path and raise his flag on all battlefields.

He noted that taking revenge is a responsibility and an act of resistance.

“American murderers will not achieve any of their aims through this great crime … however, the aims of Gen. Soleimani will be fulfilled by his brothers and sons in the Resistance.”

Pentagon confirmed that its forces have assassinated Gen. Soleimani in an air raid at Baghdad airport on Friday, noting that the attack had been ordered by the US President Donald Trump.