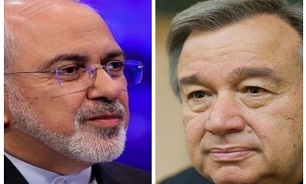 In a telephone conversation on Friday night, Zarif described the US regime’s move to assassinate Major General Soleimani as “a terrorist action”.

“Given the great popularity of Major General Soleimani among the region’s people because of his role in the fight against terrorist groups, his martyrdom has effects and consequences that cannot be controlled by anyone,” Zarif stated.

“The US terrorist regime” is responsible for all the repercussions of the assassination, the top diplomat stressed.

The UN secretary-general also voiced concern over the US move and said it would heighten tensions in the region.