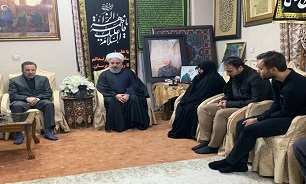 Accompanied by his chief of staff, Mahmoud Vaezi, the president condoled the bereaved family and relatives of the martyred Iranian General.

The United States forces assassinated in a terrorist assault General Soleimani and Abu Mahdi al-Muhandis, the second-in-command of Iraq’s pro-government Popular Mobilization Units (PMU) — better known as Hashd al-Sha’abi — in an attack at Baghdad’s international airport early on Friday. The Pentagon said in a statement that US President Donald Trump had ordered the attack.

Reacting to the heinous measure on Friday, Rouhani said that Iran and other independent countries of the region will take revenge on the ‘criminal’ American regime for assassinating General Soleimani.

“This cowardly act is, of course, another sign of America's frustration and helplessness in the region,” he added.