TEHRAN (defapress) – The Commander of Iran’s Army Major General Seyyed Abdolrahim Mousavi in response to Donald Trump's threat of targeting Iranian sites said that the United States will not dare to take any actions against the country.
News ID: 79799 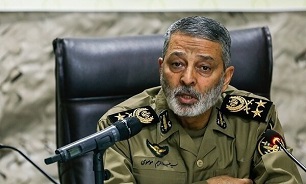 Turning to the unprecedented and unparalleled measures taken by Lt. Gen. Qasem Soleimani in the ‘Axis of Resistance’ and said, “martyr Gen. Soleimani took giant steps in the fight against terrorism in all regional countries especially Lebanon, Syria, Iraq.”

In response to the recent threats of US President Trump who said that the US will target 52 sites in Iran that are culturally important to the country in case Iran carried out its promised revenge over the US assassination of Lt. Gen. Qasem Soleimani, the Army commander said, “they make such remarks to save face before the international opinion for their unjustified and malicious act. Their move in assassination of Lt. Gen. Qasem Soleimani was unacceptable all over of the world and for this reason, they raise such baseless statements in order to overshadow their inhumane move."

However, in a possible conflict in the future, I find it unlikely that the US would have what it takes to carry out its threat; then, it would be seen where those 52 sites belonged to," the commander added.