Iran urges world to stand against institutionalization of US terrorism

TEHRAN (defapress) – Iranian Defense Minister Brigadier General Amir Hatami said all the countries of the world should adopt an appropriate stance against the US’ terroristic measures if they want to prevent the repetition of such heinous acts.
News ID: 79802 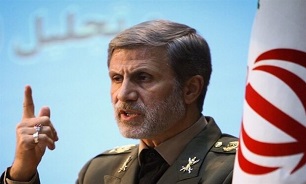 “The whole world has a responsibility to [standing against] the US’ terrorism and the assassination of Lieutenant General Qasem Soleimani, and should act properly to prevent such measures from becoming institutionalized,” Brigadier General Hatami said on Sunday.

“Today, we have witnessed a very stupid measure by the US as they ordered the assassination of a top commander,” he said, adding that “such a move during an official visit [by General Soleimani] to another country basically does not have any place in the international regulations and is completely unprecedented in the history.”

Brigadier General Hatami stressed that “everybody should know that if they do not take necessary measures, he [Trump] will repeat such arrogant and criminal acts.”

Major General Qassem Soleimani, the commander of the Quds Force of Iran’s Islamic Revolution Guards Corps (IRGC), and Abu Mahdi al-Muhandis, the second-in-command of Iraq's Popular Mobilization Units (PMU), were assassinated in US airstrikes in the Iraqi capital Baghdad on Friday.

Iran's Supreme National Security Council said in a statement that a harsh vengeance "in due time and right place" awaits criminals behind Soleimani's assassination.

Trump has drawn widespread condemnation across the United States as groups of protesters took to the streets in Washington and other US cities on Saturday to criticize him for ordering the airstrike in Iraq and to send about 3,000 more troops to the Middle East.