TEHRAN (defapress) – The body of the top Iranian commander, Lieutenant General Qasem Soleimani, arrived in his hometown, Kerman, this morning for the final stage of nationwide funeral processions and will be buried in the city later today.
News ID: 79823 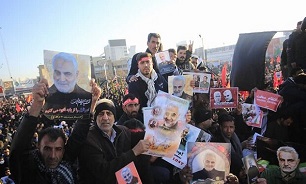 Millions of people, chanting "Death to America and "Death to Israel," are holding the funeral processions for the prominent anti-terror commander, who was assassinated by direct order of US President Donald Trump.

The bodies of the martyred commander and his Iranian companions were first transferred to the Iranian cities of Ahvaz and Mashhad, Tehran and Qom where massive funeral processions were held on Sunday and Monday. The cortege arrived in Kerman this morning, where the martyred general will be buried late in the day.

Both Soleimani and Muhandis were popular figureheads putting a stop to the rise of ISIL terrorism which once came as close as 30 km to Baghdad, while the US withdrew troops from Iraq and did nothing to stop the terrorists' advances.