TEHRAN (defapress) – Iranian President Hassan Rouhani told his Ukrainian counterpart, Volodymyr Zelensky, that the Islamic Republic will bring those behind the recent unintentional downing of an airliner of the Eastern European country to justice.
News ID: 79872 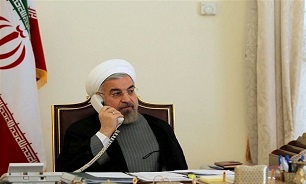 In their telephone conversation on Saturday evening, their second this week, Rouhani referred to the statement by the General Staff of the Armed Forces of the Islamic Republic of Iran and the official announcement of the result of initial investigations over the Ukrainian airliner crash, saying, “In this statement, it was announced that human error was the cause of this incident, and those individuals involved in it will be handed over to judicial authorities.”

Cooperation between the two countries’ technical experts will continue until the end of investigations into the plane crash, he stated.

Zelensky, for his part, expressed hope that cooperation between Iran and Ukrainian experts sent to Iran would continue so that the investigations will be completed in accordance with legal protocols and the bodies of the victims be given to their families as soon as possible.

In a statement on Saturday, the General Staff of the Iranian Armed Forces said the incident took place following Iranian missile strikes on a military base of the criminal US regime in Iraq and amid a possible threat of hostile military actions.

“Following the threats from the president and the military commanders of the criminal US that a large number of targets on the Islamic Republic of Iran’s soil would be hit in case of a retaliatory operation, and considering an unprecedented increase in the aerial movements over the region, the Islamic Republic of Iran’s Armed Forces were on the highest level of readiness in order to respond to possible threats,” the statement read.

It also said that military flights by the terrorist American forces had increased around Iran after the missile attack and there were reports that hostile aircraft posing threats to Iranian strategic centers had been tracked on radar screens, making the Iranian Air Defense more sensitive.

The statement added that the Ukrainian passenger plane had been approaching a sensitive military site of the Islamic Revolution Guards Corps (IRGC) in a latitude and with a form similar to those of a hostile object, and that a "human error" caused the jetliner to be hit unintentionally, leading to the martyrdom of the passengers.

It also offered an apology for the human error and expressed sympathy with the bereaved families of the victims, giving an assurance that “fundamental reforms” in the operational processes of the Armed Forces would prevent a recurrence of such errors.