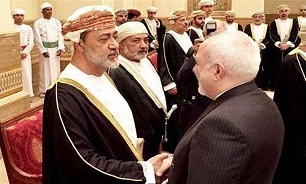 Heading a high-ranking delegation, Zarif arrived in Muscat on Sunday morning to attend the commemoration ceremony of the late Omani ruler, Sultan Qaboos.

On the sidelines of the ceremony, Zarif met with the new ruler of Oman, Haitham bin Tariq.

Speaking at the meeting, Zarif offered his condolences over the death of Sultan Qaboos and voiced Iran’s readiness to boost and deepen bilateral relations between the two countries in all areas.

Qaboos’s death was announced on Saturday. He was 79. Sultan Haitham, 65, has had a long career in public life, working in the foreign ministry, assisting with programs aimed at diversifying the country’s economy away from oil, and most recently serving as culture minister. He is a cousin of the late sultan.