TEHRAN (defapress) – Iran’s Foreign Minister Mohammad Javad Zarif lambasted the UK for parroting the US line, saying London is blindly assisting Washington in its terrorism in the region.
News ID: 79894 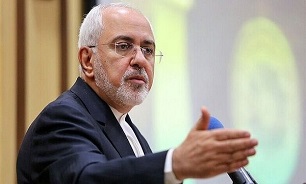 “Diplomatic malpractice? UK is parroting US line and blindly abetting its terrorist adventurism in our region,” Zarif wrote on his Twitter Monday night.

The top diplomat questioned the possible outcomes of the UK policy, recalling that “the last time UK was dragged along to infamy by the US was in Iraq war. How did that work out? Take the honorable path for a change: settle court-ordered debt to Iranians.”In another tweet, Zarif wrote that by following the US bullying, the UK will not help save the nuclear deal (JCPOA).

“For 20 months, the E3-following UK appeasement policy-has bowed to US diktat. That hasn't gotten it anywhere-and it never will. E3 can save JCPOA but not by appeasing the bully & pressuring the complying party Rather it should muster the courage to fulfill its own obligations.”

On Saturday, British Ambassador in Iran Rob Macaire participated in an illegal anti-government gathering in Tehran.

Iran’s Foreign Ministry on Monday strongly condemned his suspicious illegal and unprofessional measure and also criticized the comments by the UK Prime Minister, Foreign Minister and Defense Minister’s on the assassination of Lt. General Soleimani and his companions by the US terrorist forces.

The statement emphasized that the UK envoy’s presence in the gathering was London’s clear interference in Iran’s internal affairs contrary to principles of diplomatic relations which implies the UK’s participation in the US failed policy of maximum pressure on Iran.