TEHRAN (defapress) – The Ministry of Foreign Affairs of the Islamic Republic of Iran strongly condemned the British ambassador’s unlawful and unprofessional measure and his suspicious attendance at a gathering in Tehran, as well as the inappropriate comments made by some other UK officials.
News ID: 79897 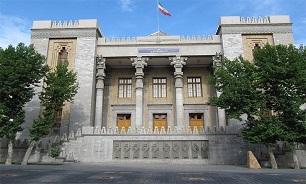 In a statement on Monday, the Foreign Ministry, once again, strongly condemned the unacceptable remarks made by the UK prime minister, foreign secretary and defense secretary about US President Donald Trump’s act of terrorism in assassinating Lieutenant General Qassem Soleimani, Abu Mahdi al-Muhandis and their comrades in a recent drone strike in Baghdad as being tantamount to London's partnership and assistance in the US’ terrorist measure.

The statement also denounced the British ambassador’s attendance at a local gathering in Tehran as a blatant interference in the internal affairs of Iran and as being in contravention of the principles of diplomatic relations that raises suspicions of the UK’s involvement in the failed policy of the US’ maximum pressure.

It also slammed the Monday comments from the UK foreign secretary who has threatened further sanctions against the Islamic Republic of Iran, according to the Foreign Ministry’s website.

“It is obvious that the UK regime is still having anti-Iran delusions on the basis of a dangerous miscalculation and is seeking an escalation of tensions in the region and in its relations with Iran. The British leaders must know that the accusations against Iran could not cover up that regime’s (UK’s) blind obedience to the US, Britain’s scandalous failure to honor its JCPOA commitments, or even the refusal to abide by a verdict given by a British court on repaying hundreds of millions of pounds in debt to the people of Iran due to its fear of the US. Any new British mistake will face Iran’s harsh and proportionate reaction, and the UK government bears responsibility for all of its consequences," the statement read.

Mentioning the history of British colonialism in the Middle East, the Iranian Foreign Ministry said the era of interference of British ambassadors in the internal affairs of other countries, fomenting divisions and fueling domestic conflicts has ended a long time ago.

The UK must abandon such scandalous activities and realize that the time when the sun never set on the British Empire has been over for decades, the statement underlined, adding, “With all different tastes and views, the vigilant people of Iran do not accept foreign interference, particularly from the governments with a record of colonialism and support for dictators, and would not forget that the very same British government is the main supporter and arms supplier of those who slaughtered (journalist Jamal) Khashoggi and who kill children in Yemen.”

The Ministry of Foreign Affairs finally called on the UK embassy in Tehran to stop any meddling and provocative measure immediately, and warned that if such behavior continues, the Foreign Ministry will not be satisfied only by summoning the ambassador anymore.

The statement came after British Ambassador to Tehran Rob Macaire attended a protests in Tehran.

On Saturday evening, a group of students gathered inside Amir Kabir University to voice their protest after the announcement that Iran’s air defense had unintentionally shot down a Ukrainian passenger plane on January 8 amid the highest level of readiness because of a possible military attack by the US.

Macaire, who was arrested in the gathering on a charge of provoking radical acts among protesters, was freed a few hours later.