TEHRAN (defapress) – Top military Aide to the Leader of the Islamic Revolution Major General Yahya Rahim Safavi said the US President Trump does not have an understanding of poilitical-security implications and international relations.
News ID: 79916 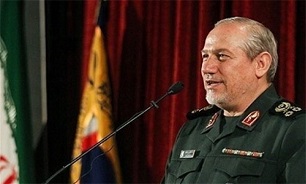 He made the remarks on Thu. in Imam Ali Officers’ Academy and pointed to the move taken by the Islamic Revolutionary Guard Corps (IRGC) in targeting US military base in Iraq and added, “IRGC launched a massive airstrike to US Ain al-Asad airbase in Iraq in retaliation of its assassination of Iran’s top commander  Lt. Gen. Soleimani and his companions in Iraq.”

Elsewhere in his remarks, Major General Safavi pointed to the characteristics of US President Trump and added, “the current president of the United States does not fully understand the political-security concepts and also international law and relations.”

It seems that his chance of winning in the US Presidential Election in 2020 has been plummeted as a result of his failure in Syria, Yemen and assassination of IRGC Quds Force Commander Gen. Soleimani and Second-in-Command of Iraq’s Popular Mobilization Units (PMU) Abu Mahdi al-Muhandis, Safavi highlighted.