TEHRAN (defapress) – In a reaction to the held Thursday meeting among 5 countries whose citizens died in an unintentional downing of Ukrainian flight by IRGC on January 8, Iran’s foreign ministry Spokesperson Abbas Mousavi said that Iran is surprised with some of the made remarks besides having such a meeting held.
News ID: 79921 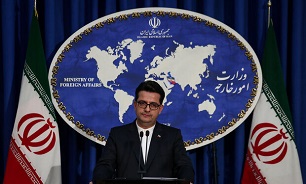 Expressing condolences with the families of the victims of the flight, the Iranian spokesman underlined that the Islamic Republic has had very good cooperation with the dispatched foreign delegations studying the case in Iran.

“All the bodies of the victims have been identified and Iran is in full cooperation with all the affiliated countries and will continue doing so as far as the regulations require,” he added.

“This is strange that the Canadian FM, only a day after doing initial measures and besides Iran’s full cooperation, reads such a statement and asks for a consular access, which was agreed upon and delivered accordingly by Iran on the first day of the incident due to human aspects of the issue,” he said.

Mousavi described that “in past years, the Islamic Republic has asked Canada to let consular representative offices be active in the two countries; however, the Canadian government has refused the issue due to the US pressure on Iranian citizens," he said, "The motivation of the Canadians’ latest remarks are not clear to us.”

To respect the families of the victims, he called on all the parties to let the procedures be done without any marginal disputes and not to mingle the issue with political motivations.

The remarks come as representatives of Canada, Ukraine, Sweden, Afghanistan, and Britain, whose citizens were killed in the tragic Ukrainian plane crash which was unintentionally downed by Iranian defense systems last Wednesday, held a meeting in London. In a statement, the mentioned countries asked Tehran to pay compensation, noting that Tehran should hold a "thorough, independent and transparent international investigation open to grieving nations."