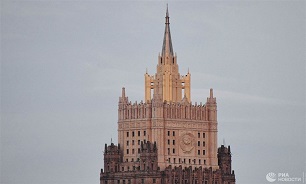 "We consider it necessary to respond to the US special representative for Iran Hook about the existence of some kind of 'UN standard' prohibiting the Islamic Republic of Iran from enriching uranium," the Russian Foreign Ministry said Monday, according to the ministry’s official website.

It said the US claim accuses the UN Security Council of contradicting the nuclear non-proliferation treaty.

"Unfortunately, such myth-making has long been part of the US approach toward nuclear non-proliferation ... In this case, we have, essentially, an accusation against the UN Security Council of making decisions contradicting the Treaty on the Non-Proliferation of Nuclear Weapons (NPT)," the ministry added.

The statement also recalled that the aforementioned treaty allows the signatories to develop nuclear energy for non-military purposes.

It also noted that the NPT does not impose any restrictions on non-nuclear states in terms of uranium enrichment as long as they are under the International Atomic Energy Agency (IAEA) control and pursue peaceful purposes.

"The NPT puts no limitations on the non-nuclear countries regarding uranium enrichment or developing other stages of the nuclear fuel cycle. There is only one condition: that all work must be directed toward peaceful ends and be under IAEA supervision," the ministry said.

The statement came after Hook told journalists on Friday about an alleged UN resolution passed in 2006 or 2007 prohibiting Tehran from uranium enrichment.

In 2015, Iran signed the Joint Comprehensive Plan of Action (JCPOA) with China, France, Germany, Russia, the United Kingdom, the United States, Germany, and the European Union. The JCPOA required Iran to put certain limits on its nuclear program in exchange for sanctions relief.

In 2018, the United States abandoned the deal with Iran, and said it would hit the Iranian economy with the "toughest sanctions ever".

On May 8, 2019, the first anniversary of the United States' unilateral withdrawal from the agreement, Iran announced a gradual reduction of its JCPOA obligations.

On January 5, following the assassination of Iran's top military commander Lt. General Qassem Soleimani in a US attack near the Baghdad International Airport, Tehran said it was rolling back all its commitments under the JCPOA.

In reaction to Iran's move, European parties to the deal, which have failed to fulfill their commitments under the JCPOA, have threatened to take Iran's nuclear issue to the UN Security Council.

The E3 (Germany, UK, and France) formally triggered the dispute mechanism within the agreement, accusing Iran of having violated the accord. Iran would now be asked to resolve the so-called dispute with the European trio, and the process could ultimately lead to the re-imposition of the Security Council’s sanctions that were lifted by the accord.

In reaction to the threat, Iran's Foreign Minister Mohammad Javad Zarif on Monday said that if Britain, France, and Germany continue their unjustifiable conduct and move to send Iran’s nuclear case to the United Nations Security Council, Tehran would have the option of leaving the NPT.

Zarif explained that Iran was the party to initially trigger the dispute mechanism in 2018 by sending three letters to the European Union to notify them of Tehran’s dissatisfaction with Europe’s non-commitment to the agreement. The Islamic Republic, he added, was then forced to resort to the nuclear countermeasures as the Europeans remained in violation of the accord.

He, however, said Tehran’s measures were reversible provided Europe would begin minding its JCPOA obligations.