TEHRAN (defapress) – South Korea will dispatch troops to the Strait of Hormuz but will not join a US-led coalition, the Korean defense ministry announced Tuesday.
News ID: 79963 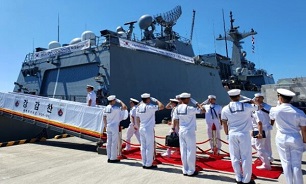 The forces will not join a US-led coalition, but conduct independent operations to help protect Korean vessels passing through the strategic waterway against piracy, Yonhap quoted the Korean defense ministry as saying, apparently in consideration of relations with Tehran.

The 300-strong Cheonghae Unit, which has been on an anti-piracy mission in the Gulf of Aden off Somalia, will broaden its mission areas into the Sea of Oman, and further to the Persian Gulf, starting Tuesday, as the 31st batch of the rotational troops along with the 4,400-ton destroyer, the Wang Geon, is to assume the role in the day, according to the South Korean defense ministry.

While the Cheonghae Unit will act on its own, South Korea will also send two liaison officers affiliated with the Cheonghae Unit to the US-led International Maritime Security Construct (IMSC) "for cooperation such as information sharing," the Korean ministry said, according to Yonhap.

Meanwhile, in reaction to the announcement, Iranian Foreign Ministry Spokesman Abbas Mousavi told reporters on Monday that "the Korean government has informed us that it wants to dispatch a part of its fleet in Aden to the region (Persian Gulf) for patrolling mission, but outside the US coalition, and we have told them that the decision is unacceptable.”

He underlined that such a decision, if implemented, will be in line with the US adventurism policy and does not fit the age-old and friendly relations between Tehran and Seoul.