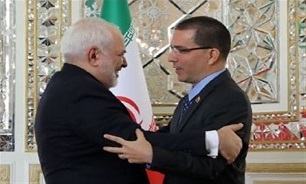 In the meeting, held in Tehran on Monday, Zarif expressed his gratitude to the Venezuelan people and government for their sympathies with Iran after the martyrdom of revered commander Lt. Gen. Qassem Soleimani and the crash of a Ukrainian plane, which led to the deaths of dozens of Iranians.

The Venezuelan top diplomat, for his part, explained how Gen. Soleimani’s martyrdom affected the Venezuelan people, particularly the youth.

General Soleimani, Abu Mahdi al-Muhandis, who was the deputy head of Iraq’s Hashd al-Sha'abi (PMU), and a number of their entourage were killed in a strike by American drones near Baghdad International Airport on Friday, January 3.

In the early hours of Wednesday, January 8, the Islamic Revolution Guards Corps (IRGC) targeted the US airbase of Ain al-Assad in retaliation for the US move.