TEHRAN (defapress)- Iran's Ambassador to Paris Bahram Qassemi in a Twitter message blasted the US for increasing its brutal sanctions and pressures against Tehran, and said Washington is merely thinking of its unilateralism scenario.
News ID: 79981 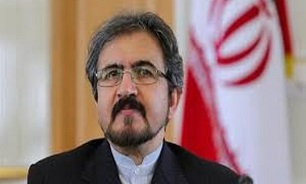 “Those pressuring Iran either in the field of JCPOA or in the field of defense capabilities and deterrence policies are exactly moving in line with promoting unilateralism and instability in the region,” Qassemi tweeted on Thursday.

In a relevant Twitter message on Wednesday, Qassemi said that the EU claiming to be supporting the JCPOA never fulfilled its commitments in the field of economy. Now, it is speaking about an action whose outcome will be nothing but destruction of JCPOA. This is the same end the US has delineated for the international accord.

In relevant remarks on Wednesday, Iranian Parliament Speaker Ali Larijani condemned the assassination of Lieutenant General Qassem Soleimani by the US, and said Washington is at the peak of its hostile approach towards the Islamic Republic compared with what it has done against Iran all throughout the last 40 years.

The US animosity towards Iran has reached its highest level since the Islamic Revolution, Larijani said in a local ceremony, noting that “We are now seeing a full-scale confrontation” where Washington carries out an act of “state terrorism”.

Lieutenant General Qassem Soleimani was assassinated in a US drone strike on Baghdad International Airport in Iraq on January 3.

The airstrike also martyred Abu Mahdi al-Muhandis, deputy commander of Iraq's Popular Mobilization Forces (PMF), or Hashd al-Shaabi. The two were martyred in an American airstrike that targeted their vehicle on the road to the airport.