TEHRAN (defapress) – Syrian forces continued to make gains in their fight against terrorists in Idlib, managing to seize control over several villages and towns in the northwestern province.
News ID: 80005 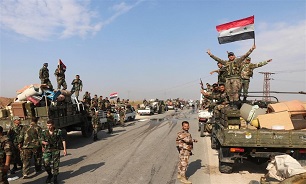 Syrian troops established control over villages and towns of Karsian, Ma’ar Shamarin, Abu Jreif and Takana in south-eastern countryside of Idlib after eliminating remaining dens of the terrorists there, SANA news agency reported.

On Saturday, Syrian soldiers conducted accurate artillery and missile strikes on militant-held positions in those towns, the report added.

Idlib remains the only large area in the hands of terrorists after the Syrian military managed to undo militant gains across the country and bring back almost all of Syrian soil under government control.