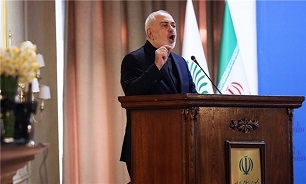 "To be better informed, he can read my entire interview," Zarif added providing the link to his interview with Der Spiegel. He also posted a screenshot of the part of the interview on prospects of talks with the United States, noting, "Too many words, then just read this."

Asked by Der Spiegel whether he rules out the possibility of negotiations with the US following the assassination of Iranian top commander Lieutenant General Soleimani, Zarif had said, “No, I never rule out the possibility that people will change their approach and recognize the realities. For us, it doesn’t matter who is sitting in the White House. What matters is how they behave. The Trump administration can correct its past, lift the sanctions and come back to the negotiating table. We’re still at the negotiating table. They’re the ones who left. The US has inflicted great harm on the Iranian people. The day will come when they will have to compensate for that. We have a lot of patience.”

Donald Trump, who is known for following world news by only reading Fox News, had said in a tweet that “Iran wants to negotiate”. “Iranian Foreign Minister says Iran wants to negotiate with The United States, but wants sanctions removed. @FoxNews @OANN, No Thanks!” tweeted the US President.

In November, Iranian Vice-President Mohammad Baqer Nobakht said that the Trump administration has been deceived by hypocrites who claimed the Islamic Republic was weak, adding that it is months now that the White House is begging Tehran for talks after being disillusioned with its false presumptions.

Nobakht referred to the US begging for talks with Iran in recent months, saying that the reason why the White House is making such a demand is that Americans now well know the ruling establishment is Iran is much stronger than they thought.

He added that French President Emmanuel Macron announced repeatedly last year that the Americans are not so interested to hold talks with Iran as they say wait a few months for Iran to finish.

Noting that Americans were deceived by the false slogans of the hypocrites, he added that now the US administration has declared several times that it is ready for talks and this is indicative of the country's high capabilities in all fields, including economy.

Based on the latest opinion poll conducted by the Americans themselves, sanctions against Iran have failed and the International Monetary Fund (IMF) has reported Iran will do away with recession by 2020 and its economy will start to thrive.

Back in September, Zarif reiterated the revealing remarks by former US Secretary of State Rex Tillerson who had admitted that Israeli Prime Minister Benjamin Netanyahu is trying to fool US President Donald Trump into waging a war.

In a post on his official Twitter account on September 21, Zarif said that even former US Secretary of State Tillerson has admitted that an international group of warmongers, or the B-Team, wants to take the US military as its own personal mercenary.

The top Iranian diplomat added that as confirmed by Tillerson, the B-Team uses US President Trump as an "easy mark" to push him into waging a war.

"Even President Trump’s former Secretary of State now confirms what we have long pointed out: #B_Team took @realDonaldTrump for an easy mark who could be lied to and pushed to war—and the US military as their personal mercenary," he said.

The top Iranian diplomat added that some still do the job, despite Trump's firing of one member of the group, referring to the US president's ousting of National Security Adviser John Bolton.

Tillerson stated that Netanyahu was “a bit Machiavellian” and cultivated relationships with world leaders he anticipated would be useful later.

Tillerson added that Israeli officials would use misinformation if they believed it was necessary to win US officials over to their side of an issue.

“They did that with the president on a couple of occasions, to persuade him that ‘We’re the good guys, they’re the bad guys’. We later exposed it to the president so he understood, ‘You’ve been played’,” Tillerson said, adding, “It bothers me that an ally that’s that close and important to us would do that to us.”

Tillerson noted that when he first entered office he was optimistic about the potential for peace in the region.

“I did believe that we were at a moment in time where perhaps we could chart a way where the Arab world could support an outcome that the Palestinians might not think was perfect — and in the past, if it wasn’t perfect, it didn’t happen — but with enough encouragement, pressure from the Arab world, that we could get it close enough that the Palestinians would finally agree,” he told the panel.

But Tillerson stated that his lack of a relationship with Trump kept the State Department from making progress on this front during his time in office. Tillerson also conceded being “a little too aggressive” in a push to overhaul the department.

“The level of change was so dramatic for a lot of people in what was already a very significant change from the Barack Obama administration to the Trump administration, which was also dramatic and traumatic,” he said, adding, “I didn’t have a full appreciation probably for just how emotional it would become for some people.”

Tillerson left office in March 2018 and has made mild criticisms of Trump since then, prompting the president to call him “dumb as a rock” and “lazy as hell” in December 2018.

The “B-team” is a term thrown into popular usage by Zarif. It refers to a group of politicians who share an inclination toward potential war with Iran, and the letter “b” in their names. They include Netanyahu, Saudi Crown Prince Mohammed bin Salman, Abu Dhabi Crown Prince Mohammed bin Zayed Al Nahyan, and, formerly, Bolton. The term has gained wider usage to refer to such Iran hawks as US Secretary of State Mike Pompeo as well as hardline US Senators like Lindsey Graham.

The word is also a tacit reference to the group’s level of competence, always lagging behind the proverbial “A-team.”

In October, Iranian President Hassan Rouhani, in a cabinet meeting, highlighted that the failure of US President Trump's maximum pressure campaign against Tehran in the past 1.5 years has shown the real power of the Islamic Republic to the world.