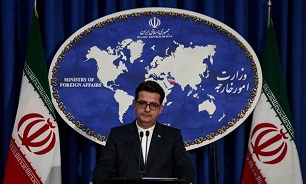 The disgraceful US peace plan, so-called "Deal of Century" is doomed to failure, he emphasized.

Mousavi described the US imposed peace plan as 'treason of century' against the inalienable rights of Palestinian people and called for the governments and freedom-seeking nations to counter the disgraceful plan.

He went on to say that Palestinian land and territory belongs to the Palestinian people, adding, “Zionist regime is an occupier and the only solution to the crisis is holding a referendum among the main residents of the land.”

The Islamic Republic of Iran believes that the issue of Palestine is the first issue of the Islamic world, he said, noting that certain Islamic states have mistaken enemy for friend and have forgotten anti-human crimes committed over the past 70 years.

Given the urgency and significance of the issue of Palestine and a big plot existing behind the so-called ‘Deal of Century’, the Islamic Republic of Iran is ready to cooperate at any level, irrespective of differences, with certain states to counter the big conspiracy which is threatening the Islamic Ummah, Foreign Ministry Spokesman Mousavi stressed.