TEHRAN (defapress) – The US Senate impeachment trial for Donald Trump will drag into next week, with a vote set for Wednesday afternoon on two articles of impeachment against the president, according to a bipartisan resolution negotiated by party leaders.
News ID: 80065 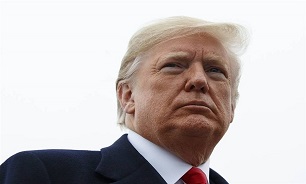 Before agreeing to the delay, Senate Majority Leader Mitch McConnell (R-Ky.) phoned Trump to get the president's approval, according to a source familiar with the conversation. Trump then signed off on the decision.

The 4 p.m. vote will conclude a 20-day proceeding, only the third presidential impeachment trial in US history. The Senate is virtually certain to acquit Trump, and even some Democrats may oppose an obstruction of Congress article approved by the House.

Closing arguments in the case will begin Monday at 11 a.m. and will last four hours. Senators will then have until Wednesday's vote to offer speeches on the trial.

McConnell and Senate Republicans stayed largely united throughout a sometimes chaotic Friday and defeated repeated Democratic efforts to have additional witnesses -- particularly former national security adviser John Bolton -- deposed as part of the Senate trial. Trump and his defense team vehemently argued against such a move. Senate GOP leaders claimed it could drag out the trial for weeks or months and plunge the Senate into a lengthy legal battle over the extent of executive privilege.

After the Senate voted 51-49 to reject the initial critical motion to debate the witness issue, McConnell and Minority Leader Chuck Schumer (D-NY) hammered out an agreement setting out the endgame for the trial. Schumer was given votes on four more motions regarding witnesses and additional evidence for the case, but all were defeated. Exhausted senators then went home for the weekend.

“We’re going to get through hopefully a few amendment votes tonight and then get a resolution that would take us to a landing spot in the middle of next week," Senate Majority Whip John Thune (R- SD) told reporters. "A lot of folks want to address the subject so that gives them a chance on Monday, Tuesday, and part of Wednesday to do that.”

Schumer Friday night said it was “a grand tragedy” to not allow witnesses in the trial.

"America will remember this day—a day when the United Senate did not live up to its responsibilities, turned away from truth and instead went along with a sham trial," he said, Politico reported.

Senate Republicans suggested scheduling concerns related to the Iowa caucuses on Monday and Trump’s State of the Union address on Tuesday were behind the possible delay in ending the proceedings. GOP senators spent about an hour hashing out the next steps during their Friday lunch.

"We do not believe that that schedule interferes with his ability to deliver a strong and confident State of the Union message in the House of Representatives to the country," White House Legislative Affairs Director Eric Ueland said.

McConnell and Schumer huddled on the floor Friday afternoon before the Senate voted against calling additional witnesses during the trial. Schumer then left the floor while McConnell spoke to colleagues.

The Senate recessed following the vote, with senators in both parties expressing confusion about what would happen next.

There was a "major discussion" among GOP senators at lunch on the trial endgame, Republican sources said. Republicans remained divided over how to wind down the trial, with several expressing dissatisfaction about dragging out the proceedings over the weekend or into next week, according to a person familiar with the matter.

Other Republicans wanted to wrap things up as soon as possible, a move leaders had telegraphed for days, so much so that the sudden change in their plans for the acquittal vote until next week caused a minor uproar during GOP lunch on Friday.

Moderate GOP senators then met with McConnell Friday afternoon — including Sens. Lisa Murkowski of Alaska, Susan Collins of Maine, Lamar Alexander of Tennessee, and Mitt Romney of Utah — to discuss the process for finishing the proceedings. Murkowski is reportedly seeking several days of closed-door deliberations, which is similar what occurred at the end of former President Bill Clinton's 1999 case.

"(Collins) thinks everyone should have an opportunity to state their views on the record, but she’s not looking for extra time for speeches," said a source close to Collins. "In fact, she doesn’t care how much time members get. She thinks the speeches can be short.”

Sen. John Barrasso (R-Wyo.) said the party leaders had been exploring how they could successfully wrap up the proceedings.

"(We'll have a) vote on witnesses ... then there is the resolution, like the organizing resolution we had the other evening, where Schumer had what, a dozen, 11 amendments, each debatable for up to two hours divided," Barrasso said. "That will happen tonight on Resolution number two, just like they did in the Clinton impeachment."

Schumer earlier denied press reports that he had presented a draft resolution to his caucus following talks with McConnell, but said he would to defend the minority's rights.

"We Democrats are united in saying we do not want this rush through," Schumer said. "Every senator has obligation, as well as a right, to let the people of their states and the American people know why they're voting on this resolution, on witnesses and documents, and on whether the president should be convicted," Schumer said. "We will fight very hard for that. We are in the minority, but we do have some power in the minority, and we will use it to prevent things from being truncated in the middle of the night."

A delay would provide more time for closing argument for Trump's defense team. And senators would get two days to make their own statements on the floor on the case.

It also allowed four Senate Democrats running for president a chance to campaign in Iowa after being stuck in Washington the last two weeks for impeachment trial.

Not all senators were happy about the delay, asserting the trial should be completed as quickly as possible since everyone knows Trump will be acquitted in the end.

"I am confident that there are Republicans who want to be done and out of here. And frankly, there are some Democrats who have had all the fun we can have being together for probably 140 hours," said Sen. Chris Coons (D-Del.).

The original organizing resolution controlling the impeachment trial only covered up until point when the Senate debated the issue of whether to depose additional witnesses, a position the House managers and Schumer strongly pushed during the last two weeks. McConnell and the White House adamantly opposed that motion, arguing it was unnecessary and could drag the trial on for weeks or months. McConnell and other top Republicans wanted to wrap up the case by late Friday night.

However, the White House request for additional time for closing arguments derailed the GOP timetable. Some Senate Republicans argued the proceedings should be brought to a close as quickly as possible, despite complaints from GOP senators.

"I would think we would finish today. Maybe a long day, but I think we should go ahead and plow through," added Sen. Rand Paul (R-Ky.).