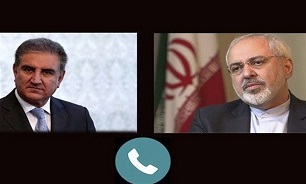 In a telephone conversation on Monday night, Zarif and Qureshi exchanged views about the latest developments in the Muslim world, including the US-Israeli plot against the Palestinians.

The two top diplomats rejected “the deal of the century” and stressed the need to boost unity among Muslims to support the Palestinian nation.

Last Tuesday, US President Donald Trump unveiled his long-delayed Middle East plan, a proposal Palestinian leaders called a “conspiracy” that “will not pass”.