TEHRAN (defapress)- Half of Israelis believe US President Donald Trump’s decision to unveil his “peace plan” was designed to tip the scales in favor of sitting Prime Minister Benjamin Netanyahu in the upcoming election, a new poll reveals.
News ID: 80125 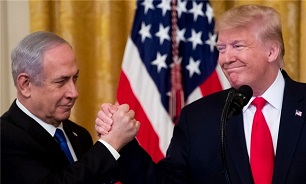 Nearly half of Israeli Jews - 46 percent - and 68 percent of Israeli Arabs deemed the American decision to unleash the “Deal of the Century” to be an attempt to meddle in the March 2 elections on Netanyahu’s behalf, according to a poll conducted in the two days before the big reveal by the Israeli Democracy Institute, RT reported.

The percentage that resented the intrusion increased as one moved further left, with fully 78 percent of respondents on the left considered the timing to constitute foreign meddling; 69 percent of centrists also thought so. Among those self-identifying as right-wing, just 33.5 percent believed Trump unveiling his plan for the solution to the half-century-old Israel-Palestine conflict constituted election interference.

Pro-Netanyahu media are so eager to begin implementing the peace plan, which gives Israel carte blanche to officially annex illegally occupied West Bank settlements, that they have apparently turned on Trump’s son-in-law Jared Kushner after he advised the PM to wait until after the election to begin annexation.

Zeroing in on Kushner as the primary obstacle to pre-election annexation of the Jordan Valley and some settlements, right-wing Israeli outlets have threatened to turn Trump’s evangelical base against him to scupper his own re-election chances, according to Israeli Channel 13.

Support for the plan is more lukewarm outside of the PM’s Likud Party base. Just 45 percent of respondents to the IDI poll supported the recognition of a demilitarized Palestinian state, honeycombed with Israeli settlements as outlined in the plan. Support was highest among voters on the left.

Former Palestinian Chief Negotiator Saab Erekat gave voice to the unanimous rejection of the plan by the Palestinians when he accused the Americans of “copying and pasting” the plans of “Netanyahu and the settlers’ councils”.

The 22 Arab League states have also unanimously rejected the “Deal of the Century”.

Netanyahu was officially indicted on corruption and bribery charges last week, on the same day the Trump peace plan was unveiled. The two events were apparently unrelated - Netanyahu officially dropped his request for parliamentary immunity earlier that same day, allowing Attorney General Avichai Mendelblit to bring the long-awaited indictments after a three-year investigation.

Trump's support has not wavered, though 32 percent of respondents to the IDI poll believe the Netanyahu probe will be the deciding factor in the first Israeli election ever to go to a third ballot after two deadlocked results.