Top Judge Warns of Iran’s Harsh Response to US Aggression

TEHRAN (defapress) – Iran's Judiciary Chief Seyed Ebrahim Raeisi warned the US that any threatening action against the Islamic Republic will send the American forces to the bottom of the Persian Gulf.
News ID: 80134 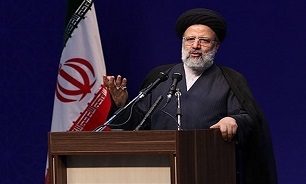 In an address to a gathering of military forces in Iran’s southern port city of Bushehr, Raeisi cautioned the Americans that if they take any action showing signs of “threat, attack, or destabilizing measures” against Iran, the Persian Gulf or the region, they will be sent into the bottom of the Persian Gulf by the powerful Iranian Armed Forces, including the Army, the Islamic Revolution Guards Corps (IRGC) and Basij.

The US forces will have to suffer defeat in confrontation with the Iranian military forces, he added.

The Judiciary Chief also praised the Iranian Armed Forces for contributing to regional security, stressing that the Iranian military forces will never allow “the Americans, the Europeans and the British” to come to the region from the other side of the world and threaten the security of people and the region.

“The mighty presence of the (Iranian) Armed Forces will not allow the Americans to sleep peacefully in the region forever,” the top judge added.

Iranian military and political officials have repeatedly warned the enemies against the dire consequences of a military action against the Islamic Republic.