TEHRAN (defapress)- Iranian President's Chief of Staff Mahmoud Vaezi said that his country cannot put its trust in US President Donald Trump, stressing that to hold talks with Tehran, Washington must first lift all of its unfair unilateral sanctions.
News ID: 80150 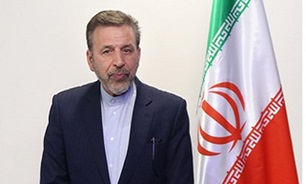 In a meeting with domestic businessmen and economic activists in the Northern city of Gorgan on Friday evening, Vaezi said Iran has not shut the doors for negotiations, adding that, however, holding talks entails the removal of cruel sanctions against Iran.

“Since we cannot trust [US President Donald] Trump, we should first be ensured of the lifting of sanctions, and then we can negotiate in the context of P5+1.”

Vaezi said despite the US animosity and economic pressures, Iran is still willing to hold talks with other countries in an equal and fair condition.

Referring to Iran's correct decision to move toward self-sufficiency in different industrial sectors, Vaezi said that the US economic terrorism has affected both the government and the public sector; so, the way to get out of the difficulties will be better cooperation, consultation and unity between people and government.

Late in November, Iranian Ambassador and Permanent Representative to the International Organizations Kazzem Qaribabadi said that Washington’s expressed readiness for talks with Tehran is fake call, adding that the US can hold negotiations with Iran with abandoning its unilateral sanctions and returning to the framework of the nuclear deal.

In a statement before the International Atomic Energy Agency (IAEA) Board of Governors which met on Verification and Monitoring of Iran in Light of United Nations Security Council Resolution 2231 passed in 2015, Qaribabadi rejected statements by the US representative to the IAEA on Washington's readiness to negotiate with Iran as a political gimmick in order to shirk its responsibilities for noncompliance with its international obligations, including the nuclear deal of 2015, officially known as the Joint Comprehensive Plan of Action (JCPOA).

"If the US is serious about entering into negotiations, it should, first, remove all re-imposed sanctions, so that the ground would be leveled. Only then, negotiations could be followed under the framework of the JCPOA Joint Commission."

"Continuation of the imposition of sanctions and other unilateral coercive measures are not consistent and coherent with their claims for negotiations," said Qaribabadi.

The nuclear deal was reached in Vienna in July 2015 between Iran and the P5+1 group of states, the US, Britain, France, Russia, and China plus Germany. It lifted nuclear-related sanctions against Tehran, which, in turn, voluntarily changed some aspects of its nuclear energy program.

The US, however, left the accord last May and reinstated its unilateral sanctions against Iran. The European deal partners, meanwhile, have bowed to Washington’s pressure, failing to honor their contractual obligations to protect Iran’s economy in the face of America’s “toughest-ever” bans.

Early in June, Supreme Leader of the Islamic Revolution Ayatollah Seyed Ali Khamenei said that the Iranian nation and officials will not be deceived by the new gambit of US President Donald Trump who is now trying to convey the impression that the White House has put aside its destructive approach towards Tehran.

Ayatollah Khamenei, delivering an address during a ceremony marking the 30th anniversary of the founder of the Islamic Republic Imam Khomeini’s departure, in the capital Tehran, underlined that Iran’s people and authorities will not fall for US President Donald Trump’s political ploys.

The Leader warned about the US’s recourse to political approaches aimed at creating the impression that it has abandoned its subversive ways against the Islamic Republic.

Ayatollah Khamenei cited the example of Trump’s comments in Japan, where he said he was not pursuing regime change in Iran and that the Islamic Republic “has a chance to be a great country with the same leadership.”

The leader said the US president was trying to say that “we are prepared to accept you,” but cautioned, “This is political shrewdness.”

“This does not dupe the Islamic Republic’s authorities and the Iranian nation. Iranians make progress if they stand on their own and Americans stay away. Wherever the US laid its step, either war, sedition, exploitation, or imperialism has followed,” Ayatollah Khamenei stated.

Ayatollah Khamenei advised Washington to mind its own business and set its own house in order, reminding how the US was grappling with high levels of crime, drug, and police brutality that was unmatched anywhere else in the world.

“We ourselves know (better) how to behave and act,” the Leader noted.

The Leader, however, noted that what the US president had said in terms of Iran’s chances with its sitting leadership was “of course true,” but the condition for the Islamic Republic to make progress was that Washington “stays away” from the country.

“Election of a person with the characteristics of Donald Trump, who is the center of debate in the United States itself over his mental, ideological, and behavioral balance, is in and of itself an indication of political decline,” the Leader said.

Ayatollah Khamenei noted how Washington had invariably supported the crimes committed by Israel and the countries behind the ongoing invasion of Yemen, adding, “They back crime. Can moral bankruptcy become any worse?”

The Leader further hailed Iran’s “doctrine of resistance” against imperialism, as a legacy of Imam Khomeini.

“The goal behind (pursuing) resistance is to reach the point of economic, political, social, and military deterrence,” Ayatollah Khamenei said. “We should reach a point, which would dissuade the enemy from committing aggression against the people of Iran,” the Leader added.

Ayatollah Khamenei hailed that the country had, to a large scale, reached that level in military strength.

The Leader said that achievement was the reason the country’s enemies were attempting to deprive Iran of its missile power, adding, “Of course, they will not be able to do this.”

Ayatollah Khamenei further hailed Imam Khomeini as an icon of resistance, whose unparalleled way of standing tall in the face of the enemies had culminated in the country’s current self-reliance.

Had it not been for the resistance put up by Iran, the Leader asserted, the county would have turned into a vassal state like Saudi Arabia, which not only is serving its oil and other resources to Washington, but is also forced to align its political approaches to that of the US.