TEHRAN (defapress) – The UN Security Council is set to vote Wednesday on a resolution that would endorse a 55-point road map for ending the war in Libya and condemn the recent increase in violence.
News ID: 80188 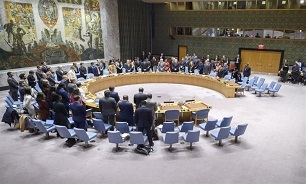 The British-drafted resolution demands the warring parties “commit to a lasting cease-fire” and insists on full compliance with a UN arms embargo that has been repeatedly broken, as called for in the plan approved by leaders of 12 world powers and other key countries meeting Jan. 19 in Berlin.

It also recalls the commitment of all participants at the Berlin meeting to refrain from interfering in Libya's conflict and its internal affairs and expresses concern “over the growing involvement of mercenaries in Libya.”

UN Secretary-General Antonio Guterres said last week that the agreement has been repeatedly violated by continuing arms deliveries to the warring parties and escalating fighting. He called the current offensives by rival forces “a scandal,” saying the commitments “apparently were made without a true intention of respecting them,” AP reported.

Libya has been in turmoil since 2011, when a civil war toppled longtime dictator Moammar Gadhafi who was later killed.

A weak UN-recognized administration that holds the capital of Tripoli and parts of the country's west is backed by Turkey, which recently sent thousands of soldiers to Libya, and to a lesser degree Qatar and Italy.

On the other side is a rival government in the east that supports self-styled Gen. Khalifa Hifter, whose forces launched an offensive to capture the capital last April and are backed by the United Arab Emirates and Egypt as well as France and Russia.

The Tripoli authorities and US officials have accused Hifter of relying on hundreds of Russian mercenaries. Sudanese armed groups from the Darfur region recently joined the fighting on both sides, according to a report by UN experts.

The draft resolution welcomes last week’s cease-fire talks between Libya’s warring sides in Geneva and calls for their continuation “without further delay in order to agree a permanent cease-fire.” It asks Guterres to submit his views on conditions for a cease-fire and proposals for effective monitoring of a truce, with a view to making detailed recommendations when a cease-fire is announced.

Russia and South Africa objected to an earlier text of the resolution.

Russia sought some major changes that were not accepted, including changing the welcome for the Berlin conference to “takes note of” the meeting and changing the expression of concern over the growing involvement of mercenaries to “foreign terrorist fighters.” The draft does reaffirm “the need to combat ... threats to international peace and security caused by terrorist acts.”

It was unclear Tuesday how Russia, especially, would vote on the resolution.

The Security Council on Tuesday voted 14-0 with Russia abstaining on a resolution extending the arms embargo, travel ban, asset freeze and other sanctions on Libya and Libyans until April 30, 2021. It also extendedthe mandate of the UN panel of experts monitoring implementation of the sanctions until May 15, 2021.