TEHRAN (defapress) – Head of the Atomic Energy Organization of Iran (AEOI) Ali Akbar Salehi said the country is open to talks on its nuclear program but will never be pressurized to make any decision.
News ID: 80190 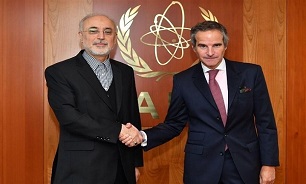 “(Iran’s) Relations with the IAEA are very good and based on mutual understanding, and as an international authority, this organization and its decisions should not be influenced by political inclinations,” Salehi said in a meeting with director general of the International Atomic Energy Agency (IAEA), Rafael Grossi, held in Vienna on Tuesday.

“Iran welcomes negotiation and logic but will not make any decisions under pressure,” the top Iranian nuclear official underlined.

After taking office in late 2019, the new IAEA director general described Iran's nuclear program as one of the priorities he would consider “immediately” and added he may meet Iranian officials soon.

The Argentine diplomat had said he would be “firm but fair” on inspections generally, including in Iran, without spelling out what that means.

In May 2018, US President Donald Trump pulled his country out of the 2015 Iran nuclear deal, known as the Joint Comprehensive Plan of Action (JCPOA).