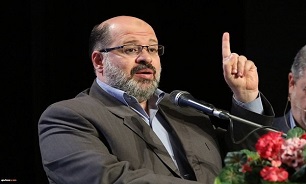 The so-called “Deal of Century” is a border between the right and wrong, the plan which was unveiled by the US President Donald Trump eventually led to the unity and amity among Muslims in the world, he highlighted.

He made the remarks late on Wed. in a Conference entitled “School of Resistance”, held in Qom province, and added, “the so-called “Deal of Century” was first raised in 2006 by the then Prime Minister of Zionist Regime Ehud Olmert and Palestinian Authority President Mahmoud Abbas.

With unveiling his so-called “Deal of Century” and assassination of Iran’s top commander Martyr Gen. Qasem Soleimani as well as exertion of pressure against people in the Middle East region, US President Trump believes in attaining victory in the region but all his malicious objectives were doomed to failure, he stressed.

People with their unity and amity turned down the Trump administration’s so-called ‘Deal of Century’ in regional and international arenas, Khaled al-Qaddumi, the Hamas representative in Tehran stated.