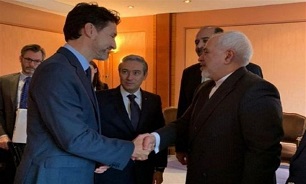 In a post on social media on Friday, Iranian Foreign Ministry Spokesman Seyed Abbas Mousavi released photos of Zarif’s meetings with Trudeau and Champagne, which were held on the sidelines of the Munich Security Conference (MSC).

The Iranian top diplomat also attended a separate meeting with his Finnish counterpart, Pekka Haavisto, in the German city and discussed issues of mutual interest.

In another meeting, Zarif held talks with the representatives of The Elders, an international non-governmental organization that was founded by anti-apartheid icon Nelson Mandela.

The 56th Munich Security Conference (MSC) is scheduled to kick off in the southern German city of Munich on Friday and run through Sunday.

The annual conference, known as the "Davos" of global security and political events, has been an important forum for top officials to discuss major issues facing the world since its inception in 1963.

The theme this year is "Westlessness," the loss of the common standing of what it means to be part of the West, according to a security report published on Monday.