TEHRAN (defapress) – Moscow rejected the US proposed "deal of the century", as it suggests holding a meeting of the Middle East Quartet at the level of special envoys.
News ID: 80212 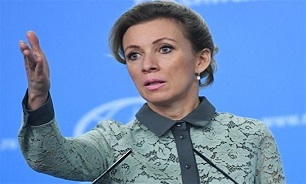 According to a commentary by Russian Foreign Ministry Spokeswoman Maria Zakharova that was uploaded to the ministry’s website on Thursday, teamwork of the global community is necessary to achieve a just and final Middle East settlement, the Tass news agency reported.

"Within this context, we emphasize that establishing direct Palestinian-Israeli negotiations under the global aegis has no alternative. With this in view, we believe that the international quartet of the United Nations, the European Union, Russia and the US, recognized by the UN Security Council as the only mechanism for facilitating the Middle East peace process, must take the role of an efficient mediator," the diplomat stressed.

"We suggest holding a meeting of the Quartet at the level of special envoys in the near future," Zakharova pointed out.

She also noted that the "deal of the century" unveiled by the US cannot become the basis for the Palestinian-Israeli settlement, since it ignores the main elements of the generally recognized international legal framework of the Middle East settlement, formalized in resolutions of the Security Council and the General Assembly of the United Nations and the Arab Peace Initiative.

The unresolved Palestinian problem remains among the key factors of instability in the Middle East, the diplomat stressed.

On January 28, US President Donald Trump unveiled key provisions of what he calls "the deal of the century," or a peace plan for Israel and Palestine based on mutual recognition of the two-state solution.

The plan provides for recognition of Israel’s sovereignty over Jewish settlements already built on the Palestinian territory.

The plan totally ignores the rights and demands of up to 15 million Palestinians around the world, leaving them out of a process that is expected to decide their fate and their future.

Opponents argue that the highly pro-Israel scheme offers no prescription for peace because it blatantly violates international law.