TEHRAN (defapress) – In his first public comments since the conclusion of US President Donald Trump’s impeachment trial, former national security director John Bolton suggested it’s unfair that the president can tweet about him, but he can’t talk publicly about his time in the White House.
News ID: 80246 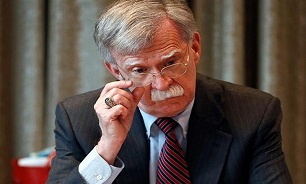 During an appearance at Duke University Monday night, Bolton was asked about a Trump tweet saying he was tougher on Venezuela than his former adviser. In response, Bolton referenced his upcoming book, saying, “I say things in the manuscript about what he said to me. I hope they become public someday.”

“He tweets but I can’t talk about it,” Bolton added. “How fair is that?”

Bolton’s comments come as one of his aides teold NBC News that it’s unclear if his book about his time in the Trump White House — “The Room Where It happened” — will publish next month as planned. The aide said a White House national security review of the manuscript could push back the book’s March 17 publication date.

Bolton himself addressed the review Monday, saying, "I hope it’s not suppressed.”

“I didn’t think I was obligated to go through prepublication review. When my first book came out I didn’t. But we’re in the process now,” he said, adding, “and for now I’m going to let it go.”

He and the White House have been at odds for nearly two months over publication of the book. The White House has said it includes classified information. But Bolton, who also wrote a book about his time in the administration of President George W. Bush as the US ambassador to the United Nations, has maintained that there is nothing classified in his book.

When Bolton submitted his book to the White House for a standard national security review in December, his attorney, Charles Cooper, wrote in a letter that he was not required to do so but had gone ahead out of an abundance of caution.

After parts of the book leaked to the media, Bolton's team said the White House review process had been corrupted.

"We continue to believe that the manuscript contains no legitimately classified material," Sarah Tinsley, a senior adviser to Bolton, recently said in a statement. She expressed concern that the review process "is more about suppressing Ambassador Bolton's book than about classification issues."

One possibility is that the White House will retroactively classify information in the book or has already done so.

Bolton, a longtime fixture in the Republican Party, recently became a target for Trump and his allies following revelations that he would directly link the president to the White House's pressure campaign on Ukraine. The New York Times has reported that Bolton writes in his book that Trump sought his help with the Ukraine campaign.

Bolton offered to testify in the president's impeachment trial, where he would have provided a firsthand account of Trump's decision to withhold US aid to Ukraine in exchange for its government's announcement of an investigation into his political rivals. But Senate Republicans rejected the idea and acquitted Trump of charges that he abused the power of his office by pressuring Ukrainian President Volodymyr Zelenskiy to announce a corruption investigation into former Vice President Joe Biden's son Hunter.

Biden is running in the Democratic primary to challenge Trump in November.

When asked Monday night whether he agreed with the president that the call with Zelenskiy was "perfect," Bolton responded, “you’ll love chapter 14.”

Bolton said the Ukraine parts of his book are “the sprinkles on an ice cream sundae,” adding, “we’ll have to see what comes out of the censorship.” He declined to comment further.

Bolton left the White House in September on contentious terms with Trump. He said he resigned, while the president said he was fired. He served 17 months as Trump's national security adviser.

Bolton is also scheduled to speak Wednesday at Vanderbilt University in Nashville, Tennessee.