TEHRAN (defapress) – US Attorney General William Barr told people close to President Donald Trump on Tuesday that he considered resigning over the president's continued messages on Twitter about the Justice Department, according to an administration official.
News ID: 80258 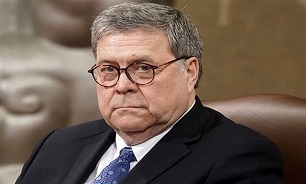 However, a Justice Department spokeswoman said Tuesday night that "the attorney general has no plans to resign."

One official said Barr's statement of concern was as much a reflection of his thinking earlier in the day as it was an effort to persuade the president to cut down on his Twitter messages about legal matters, NBC News reported.

Before leaving the White House for California on Tuesday, Trump said he realized his tweets about the Justice Department make Barr's job harder. "I do agree with that," he said. "I think it's true."

In an ABC News interview last week, after directing a new filing recommending a less harsh prison sentence for former Trump campaign aide Roger Stone, Barr said he had "a problem" with some of the president's Twitter messages.

Early Tuesday, Trump was back on Twitter, repeating his criticism of former special counsel Robert Mueller's investigation and expressing his concern about US District Judge Amy Berman Jackson, who is scheduled to sentence Stone on Thursday.

But in his remarks before leaving for the West Coast, Trump said he had "total confidence" in Barr. "I think he's doing an excellent job. He's a strong guy."

The president also said, however, that social media gives him a voice he would not otherwise get through the news media.

He said he has chosen not to interfere with Justice Department decisions, but he added: "I'm allowed to be totally involved. I'm actually, I guess, the chief law enforcement officer of the country, but I've chosen not to be involved."

Barr was at the White House on Tuesday for what an administration official said was a previously scheduled lunch with White House counsel Pat Cipollone.