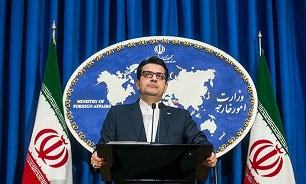 In a statement on Tuesday, Mousavi denounced the inhumane act of Zionist military forces in insulting the body of a Muslim Palestinian martyr, saying the Zionists' brutal and inhumane act is a sign of their wolfish nature and their failure to adhere to minimum humanitarian and ethical principles in dealing with Palestinians, the Foreign Ministry’s website reported.

The Iranian diplomat also emphasized the necessity for prosecution and punishment of the Quds occupiers in international courts as war criminals.

Mousavi further praised the Palestinian people's legitimate struggles and heroic resistance, saying resistance and national unity is the only option for Palestinians in the fight against the occupiers.

He further deplored the international community’s inaction in the face of the repeated crimes committed by the Israeli regime in the occupied Palestine and the violation of sovereignty and attacks on neighboring countries.

Several people were killed in an Israeli airstrike on Damascus, a war monitor said on Monday, as Israel confirmed raids on the Syrian capital as well as on the besieged Gaza Strip.