TEHRAN (defapress) – Iranian Foreign Ministry Spokesman Seyed Abbas Mousavi said domestic airlines have been given permission for the resumption of flights to the United Arab Emirates, after the Arab country suspended all flights to and from Iran over coronavirus concerns.
News ID: 80354 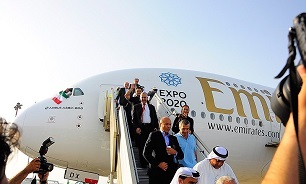 Commenting on the UAE’s abrupt and unannounced decision to suspend the flights to and from Iran, which has caused problems for a number of the Iranian citizens trying to return home, Mousavi said on Thursday that the Ministry of Foreign Affairs and the Iranian diplomatic missions in Abu Dhabi and Dubai have made ceaseless efforts to make arrangements with the authorities at Iran Civil Aviation Organization and the UAE Embassy in Tehran in order to obtain permission for the resumption of flights operated by Iranian airlines.

“According to the latest information, the basic approval has been granted to give permission for the flights, and the related flights will be operated soon,” he said.

The spokesman added that the Foreign Ministry has been doing its utmost to resolve the problem, expressing hope that the coordination among all relevant organizations would allow for the repatriation of the Iranian citizens.

The UAE has suspended all flights to and from Iran for at least a week over the outbreak of the new coronavirus.

The Arab country’s General Civil Aviation Authority made the announcement on Tuesday via the state-run WAM news agency, just hours after Dubai International Airport, the world’s busiest for international travel, said there would be restrictions on flights there.