Palestinians Not Intimidated by Israeli Occupiers

TEHRAN (defapress) – A member of the political bureau of the Palestinian Islamic Jihad said the movement takes the Israeli threats to attack Palestinians serious but the resistant nation will never be intimidated by them.
News ID: 80373 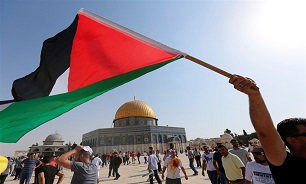 "The threats of the Zionist regime do not frighten either the Islamic Jihad or the Palestinian nation," Walid al-Qatati told the Arabic-language Palestine Today TV.

However, he added, no political or moral calculations and considerations can preclude the regime from carrying out assassination operations.

Al-Qatati further said that what keeps the enemy from engaging in assassination is the deterrence of the Palestinian resistance and the balance of power manifested in all of its battles with the enemy.

"We take the threats of the occupiers seriously, but they are not something new, because the Zionist regime cannot stop the violence and terrorism against the Palestinian people," the Islamic Jihad official went on to say.

On Monday, a ceasefire between the Palestinian Islamic Jihad and Israel was reached in the Gaza Strip after two days of heavy fighting.

The latest escalation began after Israeli soldiers last Sunday shot dead Mohammed al-Naim, a member of the Islamic Jihad's armed wing, who was allegedly planting an explosive device at the heavily secured Israeli fence east of Khan Younis in the southern Gaza Strip.

In a graphic video that went viral, an Israeli bulldozer violently retrieved al-Naim's body and it remains in the custody of Israeli forces.

Islamic Jihad responded by firing a barrage of rockets and mortar rounds at Israel, which prompted the military to strike Islamic Jihad targets in Syria, where some of the group's leaders are based. Two more Islamic Jihad members were killed in an overnight air attack.