TEHRAN (defapress) – Consultations between a delegation from eastern Libya and Syrian officials regarding Turkish aggressions in both countries have drawn the attention of analysts.
News ID: 80406 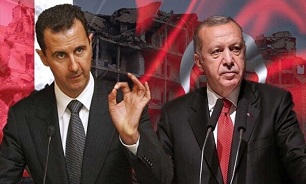 Currently, the situation of foreign policy and military aggressions of Turkish President Recep Tayyip Erdogan in the regional countries is not desirable at all. One on hand, he has waged a war against the Syrian government and reports of attacks launched by the Turkish military and its terrorist groups against the Syrian army and villages are released every day. One the other hand, the Turkish military has become involved in military clashes in the Libyan front, especially Tripoli. Erdogan has sent military troops to Libya to support the Government of National Accord against the Libyan national army led by Khalifa Haftar.

In both fronts, there are reports of the Turkish military getting killed and their drones and equipment destroyed.  Meanwhile, there has been a report that attracted the attention of many analysts who believe that this move is, in fact, the first action carried out by Arabs against Erdogan’s aggression.

Recently, a delegation led by the Deputy Prime Minister of the Libyan government Abdulrahman Al-ahirash (based in Tobruk) and the Libyan Foreign Minister Abd Al-hadi Al-havij traveled to Syria. During the trip, the two sides signed a memorandum of understanding regarding the opening of diplomatic headquarters along with coordinating the stance of Damascus and Tobruk in international circles.

The delegation also met with Syrian President Bashar al-Assad and held talks on the fight against terrorism and countering Turkish actions. It appears that the focus of these talks is how to respond to Turkish aggression in both countries. The East Libyan government, which sees Erdogan against itself, has no choice but to come close to Syria in order to create unity against their common Enemy that is Turkey.

In the meantime, conflict arose between Turkey and Russia over Idlib in Syria. While the death toll of Turkish soldiers in Syria is reported, Erdogan maintains that Russia failed to comply with the agreements reached between Moscow and Ankara. Turkey claims that the Syrian army has violated agreements signed in Sochi and launch a series of attacks on its military. Russia sides with the Syrian army, however, Turkish aggression against Syria and its army is an indefensible action.

Erdogan is striving to convince Russian officials that the Turkish attacks in Syria are in fact in line with the fight against terrorism and that the response of the Syrian army to these aggressions disrupts the peace process in Syria.

It is true that Russia and Turkey have strategic ties, but it seems that they have encountered a conflict of interest over Idlib, with some analysts suggesting that Russia’s support for Syria over the Idlib case is intended to make it possible for Moscow to put pressure on Turkey over Libya.

Disputes between Turkey and Russia emerged after an agreement on the delineation of maritime borders was signed between the Libyan Government of National Accord and Turkey within the framework of a security agreement. Many countries criticized the agreement. In addition to sending troops to Libya, Turkey has repeatedly transferred terrorists to the country from Syria in order to fight alongside the Libyan overnment of National Accord against the national army. Ankara's move to transfer these terrorists to Syria has also been controversial and has drawn criticism from many countries.

Erdogan’s statements have been contradictory after military failures in both of these countries. Turkish President once speaks of supporting the demands of Syrian and Libyan nations, and later notes that Turkey is pursuing its interests in Syria and Libya.

Today, it appears the fight against terrorism has become a good excuse for Erdogan to initiate military intervention in Syria and Libya. However, Erdogan's effort to partner with US President Donald Trump to plunder Syria's oil resources should not be overlooked.

One cannot ignore the fact that Turkey’s military aggression in Arab countries is due to differences and gaps between them, and Erdogan's dreams of Syria and Libya appear to be diminishing as Damascus and Tobruk come closer.