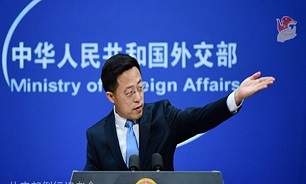 The United States' 'wrong approach' has led to the current situation of ran nuclear deal, he said, also urging the International Atomic Energy Agency (IAEA) to comply with the principles of impartiality regarding Iran’s nuclear program.

Speaking in his weekly press briefing on Wed., he pointed to the IAEA’s new report on Iran and said, “we have taken note of the IAEA's latest reports on Iran. It confirms that the agency's verification activities on Iran's implementation of the JCPOA have been going on, that Iran has not taken the fifth step of reducing commitments and has not diverted declared nuclear material for other purposes. China encourages Iran to continue cooperation with the agency. At the same time, we hope the agency will uphold the principle of objectivity, impartiality and neutrality, exercise safeguards oversight on Iran in strict accordance with its mandate, and work together with Iran to resolve relevant issues.”

“I reiterate, the US unilateral withdrawal from the JCPOA and maximum pressure on Iran is the root cause of the current Iranian nuclear crisis. The US should give up its wrong approach and leave room for dialogue and negotiation. Parties to the deal should follow the step-by-step and reciprocal approach and seek full and effective implementation within the Joint Commission framework. The IAEA board should properly handle the issue and support diplomatic efforts to preserve the JCPOA. China will continue to work in close collaboration with relevant parties to uphold the deal and realize a political and diplomatic solution of the issue,” he added.

The IAEA issued two reports on the Iranian nuclear issue on March 3. One is a quarterly report on Iran's implementation of JCPOA obligations. It says Iranian stockpile of enriched uranium has exceeded one ton and Iran is continuing violation of limits in other key areas set out in the deal. The other is a report on Iran's implementation of the comprehensive safeguards agreement and the additional protocol. It asks Iran to provide access to two locations.