Maduro says US is hatching plans for war against Venezuela

TEHRAN (defapress) – The United States is hatching a plan for war against Venezuela, Venezuela’s President Nicolas Maduro said at a meeting with governors and mayors in Caracas on Friday.
News ID: 80439 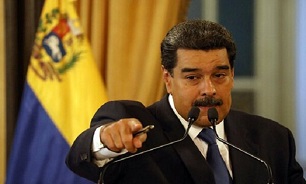 "They have decided to make a plan to bring war and terrorism to Venezuela, to destabilize it, to fill it with violence, to trigger an armed conflict and to excuse military intervention in our country," Maduro said at the meeting telecast on government-run TV, according to TASS.

Maduro said that the United States had chosen Brazil as its supporter in this scheme.

"We are asking the democratic and humanitarian circles, the people of Brazil and the armed forces [of that country] to stop any adventures against Venezuela by [US President] Donald Trump-backed [Brazilian President] Jair Bolsonaro," Maduro said.

Tensions in Venezuela surged up after the opposition’s leader Juan Guaido, whose appointment as the speaker of parliament had been annulled by the Supreme Court, on January 23, 2019 proclaimed himself as acting president. He was promptly recognized as acting head of state by the United States. The Lima group of countries (except Mexico), the Organization of American States and most EU countries followed suit. Maduro slammed this as a government coup attempt and severed diplomatic relations with the US. Russia, Belarus, Iran, China, Cuba, Nicaragua, Syria and Turkey came out in his support.