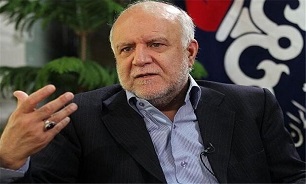 Zanganeh told Bloomberg in an interview published on Monday that Iran’s hands are tied up when it comes to buying medicines and food from abroad because the American sanctions have hampered the country’s oil sale as the main source of revenue for the government.

Zanganeh talked to Bloomberg on the sidelines of a recent meeting of the Organization of Petroleum Exporting Countries (OPEC) in Vienna, Austria.

“It's a very big lie,” said Zanganeh, adding, “Do they think that we have billions of dollars in deposit in the international bank to come into us to use that money for buying the food and medicines.”

Zanganeh said that US sanctions have specifically targeted the Iranian people and not just the government of the country.

He said the Americans should be held into account for making life difficult for the Iranians, especially the underprivileged.

“I believe ... at some time in the future these should be asked in a criminal court,” said the minister.

The comments come as Iran is struggling to contain the outbreak of the novel coronavirus that has so far infected 7,161 people and taken over 200 lives in the country.

US authorities have claimed that their sanctions on Iran, enacted since November 2018 and months after Washington pulled out of a nuclear agreement with Iran, have not affected the trade of humanitarian goods.

However, international organizations and governments have asked the US to lift its bans and allow Iran to access the medicine and medical gear it needs to fight the new coronavirus.

Commenting on the disagreements between the OPEC and allies including Russia, a group known as OPEC+, on the need for further cuts to the global supply of oil, Zanganeh said that a dive in the prices that has taken place since the strained OPEC+ meeting on Friday would be reversed soon.

The Iranian oil minister said there was a need for OPEC to restore its position as a key player in the global oil trade and not rely too much on non-OPEC members.

"I believe it's a necessity for (OPEC) members to rely on themselves like before and not decide something subject to the acceptance of the non-OPEC countries,” he said.

However, he said that the OPEC would still need the contribution of oil producers like Russia to create a balance in a market which has already faced a supply glut and a record low demand as a result of the spread of coronavirus.

“A wise man told me that life is full of compromises. And we hope to witness one of these compromises with Russia ... my experience tells me that it will happen very soon," said Zanganeh.