Trump Has Not Been Tested for Coronavirus, White House Says

TEHRAN (defapress) – US President Trump has not been tested for the novel coronavirus, the White House said in a statement late Monday, despite being in contact with multiple lawmakers who have since gone into self-imposed quarantine.
News ID: 80467 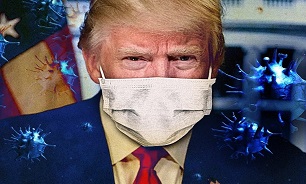 "The President has not received COVID-19 testing because he has neither had prolonged close contact with any known confirmed COVID-19 patients, nor does he have any symptoms," White House press secretary Stephanie Grisham said in a statement. "President Trump remains in excellent health, and his physician will continue to closely monitor him."

The president appeared at a White House press briefing earlier Monday, where he said the administration would propose a number of economic measures to try to stem the financial fallout of concerns about the virus. But he did not take any questions, including about whether he had been tested for the virus, The Hill reported.

Trump has been in contact in recent days with at least three people who have since gone into self-quarantine as a precaution after coming into contact with someone at the Conservative Political Action Conference (CPAC) who tested positive for coronavirus.

Trump shook hands with Rep. Doug Collins (R-Ga.) on Friday when the two toured the Centers for Disease Control and Prevention with other officials. Collins said Monday he was going into self-imposed quarantine.

Rep. Matt Gaetz (R-Fla.) made a similar announcement on Monday, hours after he flew on Air Force One with Trump coming back to Washington, DC, from Florida.

The president is an admitted germophobe, and White House officials have said he is fastidious about washing his hands. Still, his proximity to the lawmakers who are going into self-quarantine underscores the growing threat of the virus, even to those at the highest levels of government.

There are more than 600 confirmed cases of the coronavirus in the United States, including individuals who have been repatriated, and 22 people in the US have died from the virus, according to data compiled by Johns Hopkins University.

New cases are being reported daily. The District of Columbia and nearby Arlington and Montgomery counties have all confirmed their first known cases of the virus in recent days as well.