US carries on airstrikes against multiple PMU positions in Iraq

TEHRAN (defapress) – The US has carried out a series of airstrikes against multiple locations of the Iraqi Popular Mobilization Units (PMU) on Friday night.
News ID: 80493 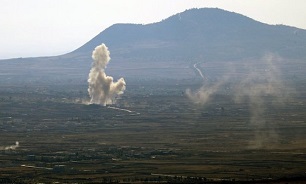 The Iraqi Interior Ministry's Security Media Cell announced in a statement, “At 01:15 local time on Thursday (2215 Wednesday) an American aerial bombardment struck headquarters of Hashd al-Sha’abi, emergency regiments as well as commandos from the 19th Division of the army.”

“The airstrikes targeted positions in Jurf al-Nasr town, located about 60 kilometers southwest of the capital Baghdad, Musayyib town in the central province of Babil, the holy shrine city of Najaf as well as the ancient central city of Alexandria,” the statement added.

Iraqi officials also announced an airstrike had hit an airport under construction in the holy city of Karbala, located about 100 kilometers (62 miles) southwest of Baghdad.

According to the latest reports, the air raid killed a worker and left great material damage at the site.

The early Friday US airstrikes were carried out about 24 hours after at least 18 PMU fighters were killed in air raids targeting an area southeast of the city of al-Bukamal in eastern Syria and near the border with Iraq.