TEHRAN (defapress) – Permanent Representative of the Islamic Republic of Iran to the Organisation for the Prohibition of Chemical Weapons has been elected as one of the vice-chairs of the Executive Council of the OPCW.
News ID: 80497 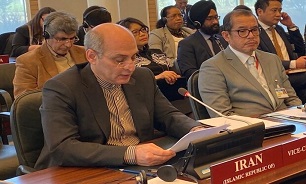 During the 93rd Session of the Executive Council of the Organisation for the Prohibition of Chemical Weapons on Wednesday, March 11, Alireza Kazemi Abadi was elected as the vice-chair of the OPCW Executive Council from the Asia regional group.

The representative of the US protested that Iran’s envoy has been elected as a vice-chair of the Executive Council, saying he could not agree with what he called the state sponsors of terrorism taking a post according to the US’ domestic law.

In response to the American ambassador’s protest, permanent representative of Iran to the OPCW said, “The Islamic Republic of Iran has been elected as the vice-chair of the Executive Council by the general consensus among the Asian group’s Member States.”

“The US has already proved that it has no respect for the international law and the international organizations, and is the main sponsor of the terrorist groups and state terrorism, particularly in the Middle East,” Kazemi Abadi added.

“The brazen example of the American terrorist measures was the US president’s order to assassinate (Iranian commander) General (Qassem) Soleimani and his entourage on the Iraqi soil, which amounts to a clear violation of the fundamental principles of international law, the United Nations Charter, and the International Covenant on Civil and Political Rights,” the Iranian ambassador stated, saying the US, with such shameful record, is in no position to portray itself as an anti-terrorism country.