TEHRAN (defapress) – The forces of the Iranian Army started a war game on Sunday to monitor and prevent further spread of the new coronavirus (COVID-19) in the Islamic Republic.
News ID: 80513 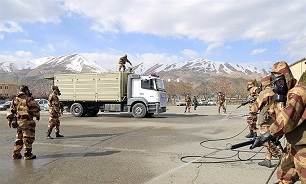 The war game is being staged by the Army’s Biodefense Base and under the command of Deputy Chief of Army for Coordination Rear Admiral Habibollah Sayyari.

The Army Ground Force is taking the lead in the exercise, whose field commander is Brigadier General Kiumars Heidari.

The war game came as Leader of the Islamic Revolution Ayatollah Seyed Ali Khamenei instructed the Iranian Armed Forces to bolster the fight against the new coronavirus, known as COVID-19, saying the outbreak of the disease may be "a biological attack".

In an instruction to Chief of Staff of the Iranian Armed Forces Major General Mohammad Hossein Baqeri on Thursday night, Ayatollah Khamenei praised the services of the Armed Forces provided for the people to counter the novel coronavirus and stressed the need to organize the services through establishing “a health and treatment base”.

“The division of duties and missions of the organizations and departments of the Armed Forces would be one of the tasks of this base,” Ayatollah Khamenei stated.

“It (the health base) should work in full coordination with the administration and the Ministry of Health,” the Leader added.

“Given that there is evidence that raises the possibility of this event being a biological attack, this measure can also be an exercise in biological defense and increase national power and might,” Ayatollah Khamenei said.