No Plan to Quarantine Cities 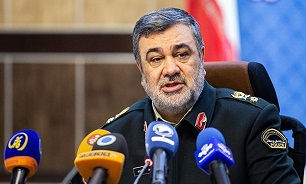 Speaking at a military gathering on Sunday, the Police commander said neither the Coronavirus Fight National Headquarters nor the Police have put the idea of quarantining the cities on the agenda.

The Police believe that the new disease, like the previous challenges, is going to be controlled and contained with public cooperation, devotion and rapport, he added.

The commander also warned of the enemies’ push for psychological war in order to provoke people into hoarding goods and disrupt the distribution of basic commodities in Iran.

Iranian President Hassan Rouhani also dismissed the notion of quarantine, saying on Sunday, “There is rumor that a number of shops and some businesses would be quarantined in Tehran or in some other cities; there is no such thing at all, there is no quarantine, not today, not during the Nowruz holidays, not afterwards and not before that.”

“Everybody is free in their businesses and activities,” the president underlined, saying that the administration strives to offer services and run the economic activities in such a way that people would stay at home as much as possible, would not attend gatherings, and all activities would conform with the health protocols.

The death toll form coronavirus in Iran rose to 724 on Sunday, while nearly 4,600 patients have recovered from the disease in the country so far.