TEHRAN (defapress) - Russian President Vladimir Putin dismissed comparisons to a tsar on Thursday, arguing he “works every day” and listens to what people want.
News ID: 80557 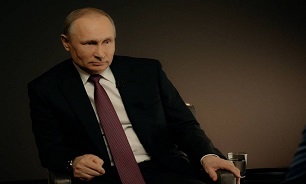 “Well, this is not true,“ Putin said when asked about being described as a Russian imperial-era ruler.

“Maybe someone else can be called a tsar. But in my case, I don’t reign, I work every day," he told the state-run TASS news agency.

The interview aired on Thursday as part of a series rolled out by TASS this month to mark 20 years since the 67-year-old Putin took the helm of Russian politics.

It was not clear when the segments were recorded, but the series began airing before Putin said this month that he wants an opportunity to run for president again, as part of his constitutional reforms, AFP reported.

The reforms proposed in January include granting more power to parliament and strengthening the role of the State Council.

An amendment approved last week would allow Putin to run for another six years in the Kremlin in 2024 and again in 2030. The reforms will be subject to a public vote.

When asked what he foresees past 2024, Putin deferred to the perspective of “people’s sentiments... what they want.”

“The primary source of power is the people,“ he said. “It’s very important for me to feel and understand what people want.”

“A tsar is one who just sits there, looks down from above and says: ‘They will do as I order,‘ while he just tries on a cap and looks at himself in the mirror,“ Putin said.

“On the contrary, I work every day.”