Trump Signals Openings: US Not 'Built to Be Shut Down'

TEHRAN (defapress) – US President Donald Trump said Monday that his administration would work to allow local economies to “cautiously resume” activities at the appropriate time amid the coronavirus outbreak, adding that the United States “wasn’t built to be shut down.”
News ID: 80598 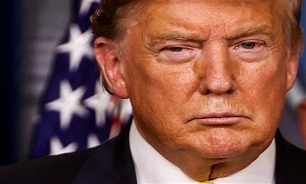 “Our public health experts, who are terrific, are studying the variation and the disease across the country, and we will be using data to recommend new protocols to allow local economies to cautiously resume their activity at the appropriate time,” Trump told reporters in the White House briefing room Monday evening.

“Our country wasn’t built to be shut down,” Trump continued. “This is not a country that was built for this”, The Hill reported.

The remarks came one week after Trump announced social distancing recommendations for the American public, and they represented a definitive signal the US president would work to loosen those guidelines for certain areas of the United States in the near future.

The coronavirus pandemic, which has sickened upward of 40,000 Americans, has had a dire impact on the US economy, forcing businesses to close and causing massive layoffs.

Independent of federal guidelines, some state and local officials have taken their own actions to limit the spread of the virus by ordering schools and businesses closed, particularly in areas that have seen significant community spread.

Trump declared Monday that the American economy would soon be up and running, predicting businesses would reopen in a matter of weeks.

"America will again, and soon, be open for business," Trump said.

"This was a medical problem," he added. "We are not going to let it turn into a long-lasting financial problem."

But the president acknowledged that the death toll would rise in the US and that the situation would worsen.

There were more than 43,000 confirmed cases of coronavirus in the US as of Monday evening, and more than 500 Americans have died from it. More than 100 of those deaths occurred on Monday. Many of the cases have been reported in New York, California and Washington State.

Trump cautioned that businesses may not be able to open in a week, at the end of the 15-day window for the current guidelines, but again expressed optimism it would be “soon.”

Trump’s remarks came amid debate about when his administration should loosen 15-day guidelines issued last week calling on Americans to avoid bars and restaurants, cancel nonessential travel, and limit in-person gatherings to 10 people or fewer.

Some of Trump’s advisers have pushed for a loosening of the guidelines soon, arguing that doing so would offer a boost to the US economy, particularly in areas where the virus hasn’t had as significant of an impact.

The stock market has plummeted amid fears over the virus, and unemployment rates are expected to climb sharply in the weeks to come as major companies furlough or lay off workers. The hit could be particularly hard for Trump to take given how closely he has tied his reelection bid to the economy.

But loosening the restrictions could put Trump at odds with public health officials, some of whom have said Americans would need to avoid public places for a few months.

Trump was asked Monday whether he would heed the advice of public health experts such as Dr. Deborah Birx and Dr. Anthony Fauci if they recommended the guidelines be kept in place for longer or instead decide it was more important to revive the economy. Trump did not provide a definitive answer but suggested it wasn’t an either-or decision and insisted he would not keep the measures in place for several months.

“Well, you’ll see what happens,” Trump said. “It’s a great question, but we can do two things at one time.”

“Parts of our country are very lightly affected,” Trump continued, pointing to states such as Nebraska, Idaho and Iowa. “Why would we close down 100 percent of the country?”

Trump’s talk of reopening the country for business comes as governors across the country — including in New York, California, Illinois, Oregon, Ohio and Michigan — have imposed shelter-in-place orders and shuttered nonessential businesses.

Many of those governors have spoken about the need to ensure state economies don’t crumble because of a long-term shutdown but have acknowledged changes to daily life could be necessary for months.

Vice President Pence, a former governor and the leader of the federal response to the coronavirus, urged Americans on Monday to respect state and local restrictions that are in many cases tougher than those imposed by the Trump administration.

“We made it clear to the governors that this president and this administration fully supports decisions that governors are making in communities and states that are particularly impacted by the spread of the coronavirus, and we are grateful for their efforts,” Pence said.