South Korea to Tighten Border Checks for US Entries

TEHRAN (defapress) – South Korea said it would tighten border checks for travelers from the United States by Friday as concerns rise over imported coronavirus cases despite a decline in domestically transmitted infections.
News ID: 80612 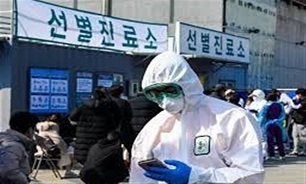 Seoul has imposed strict border checks on visitors from Europe, China, Italy and Iran, requiring them to sign up to a smartphone application to track whether they have any symptoms such as fever. A two-week mandatory quarantine for all long-term arrivals from Europe took effect last Thursday.

Prime Minister Chung Sye-kyun said similar measures should be implemented for entries from the United States no later than Friday, Reuters reported.

“We don’t have much time given the situation where our citizens living in North America including students who are anxious about a rise in confirmed patients there and expected to return home,” Chung told a meeting.

The Korea Centers for Disease Control and Prevention reported 100 new coronavirus cases on Wednesday, bringing the total infections in the country to 9,137. The death toll rose by one to 126.

Of the new cases, 34 were from travelers, KCDC data showed.