TEHRAN (defapress) – Syrian army troops in a fierce firefight repelled an attack by a militant group on its positions along the Dara’a-Sweida axis on Friday.
News ID: 80638 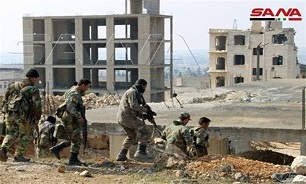 According to a field report from the area, the militants attacked the Syrian army’s positions near the city of Busra Al-Sham, prompting the military to call for reinforcement from Sweida, Almasdar reported.

The report said the army troops were able to fend off the attack after the militants failed to infiltrate their positions east of Busra Al-Sham.

This latest attack by the militants comes at a time when tensions in the Dara’a Governorate are at a year-long high.