TEHRAN (defapress) - The commander of a US aircraft carrier that has been hit by a major outbreak of coronavirus has been relieved of command.
News ID: 80700 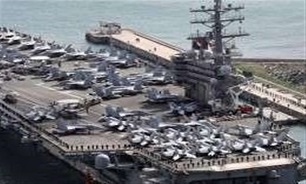 The commander of a US aircraft carrier that has been hit by a major outbreak of coronavirus has been relieved of command for showing "poor judgment" days after writing a memo warning Navy leadership that decisive action was needed to save the lives of the ship's crew, acting Secretary of the Navy Thomas Modly announced on Thursday.

Modly told reporters that Crozier was removed for showing "extremely poor judgment" and creating a "firestorm" by too widely disseminating the memo detailing his concerns, copying some 20 to 30 people.

He said Crozier was not removed because of any evidence suggesting he leaked the memo to the press, but rather for allowing "the complexity of his challenge with the Covid breakout on the ship to overwhelm his ability to act professionally when acting professionally was what was needed the most at the time."

"I have no information nor am I trying to suggest that he leaked the information. It was published in the San Francisco Chronicle. It all came as a big surprise to all of us that it was in the paper, and that's the first time I had seen it," he added, CNN reported.

The information in question was contained in a memo written by Crozier earlier this week to the Navy's Pacific Fleet.

Modly called Crozier's note "a blast-out email to everyone he knows."

"We are not at war. Sailors do not need to die. If we do not act now, we are failing to properly take care of our most trusted asset — our Sailors," it read, three US defense officials confirmed to CNN.

Modly said Crozier was relieved because he went outside the chain of command and sent his memo over an unsecured system, adding to the chances it could be leaked.

"He sent it out pretty broadly, and in sending it out broadly he did not take care to ensure that it couldn't be leaked, and that's part of his responsibility, in my opinion," Modly said.

"I have received absolutely no pressure. I have had no communication with the White House about this," he added. "I did, when I was arriving closer to this determination yesterday, I called Secretary Esper and told him that this was the direction I was heading and he told me he would support my decision whatever that might be."

Top Democrats on the House Armed Services Committee slammed the move in a statement Thursday.

"While Captain Crozier clearly went outside the chain of command, his dismissal at this critical moment -- as the Sailors aboard the U.S.S. Theodore Roosevelt are confronted with the COVID-19 pandemic -- is a destabilizing move that will likely put our service members at greater risk and jeopardize our fleet's readiness," they said.

"The COVID pandemic presents a set of new challenges and there is much we still do not know. Captain Crozier was justifiably concerned about the health and safety of his crew, but he did not handle the immense pressure appropriately. However, relieving him of his command is an overreaction," the lawmakers added.