TEHRAN (defapress) – Iran’s President Hassan Rouhani said the country’s new smart distancing initiative aimed at containing the COVID-19 pandemic will come into effect from April 11 and must be followed by all.
News ID: 80765 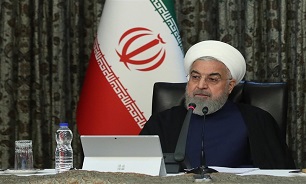 “The initiative must be implemented strictly under the close supervision of the Health Ministry and the National Headquarters to Fight the Coronavirus,” Rouhani said in a phone conversation with Iranian Health Minister Saeed Namaki on Thursday.

The president further said that the new measures will come into force on Saturday, stressing that all health protocols need to be observed by all.

On April 4, the Iranian president unveiled a plan for smart social distancing across the country as a new phase of measures to prevent the spread of coronavirus.

One day later, he announced that low-risk economic activities would resume from April 11.

The president has repeatedly called on Iranians to stay indoors, noting that social-distancing and self-quarantining have helped the country’s health authorities make major breakthroughs in their battle against the viral infection.

In a separate phone conversation with Governor of the Central Bank of Iran (CBI) Abdolnasser Hemmati on Thursday, the Iranian president urged the International Monetary Fund (IMF) to fulfill its duties toward all member countries, including Iran, without any bias.

“Under these tough circumstances, the IMF should perform its duty with regard to its international commitments and avoid being swayed by mischievous acts of the enemies of the Iranian nation,” Rouhani said.

Iran has submitted a request for a $5-billion emergency loan, which it requires to fight the new coronavirus outbreak. Tehran has asked that the loan be provided under the Fund’s Rapid Financing Instrument (RFI), a mechanism which is available to all member countries facing an urgent balance of payment need.