TEHRAN (defapress) – At least 22 Daesh militants were killed after Syrian troops repelled a major attack by the terror group in the central province of Homs.
News ID: 80775 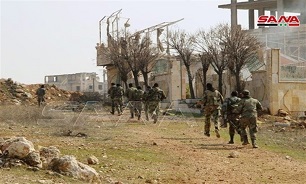 The so-called Syrian Observatory for Human Rights said Syrian forces backed by Russian airstrikes were battling the Takfiri terrorists to prevent them from entering the desert town of al-Sukhna in Homs, Press TV reported.

The UK-based monitoring group also claimed that at least 27 Syrian forces had been killed during the clashes.

Syrian forces have taken back many areas once controlled by the terrorist groups. The troops and allied forces are currently busy fighting last bastions of militants in the northwestern province of Idlib and areas in the neighboring Aleppo province.

The large-scale offensive in Idlib has caused increasing friction with neighboring Turkey as Ankara insists that Syria and its main ally Russia are violating the terms of a ceasefire agreement reached in Russia in September.